I love Johann Hari.  The man who recently took on Kenneth Tong and won, has a piece in this morning’s Independent on some the absolutely ludicrous happenings this week on their side of the pond.

I am exhausted. I have spent all week trying to brainwash small children into being gay, by relentlessly inserting homosexuality into their maths, geography and science lessons. Their little eyes widened when the gay algebra lesson started, but it worked: their concept of “normal sexual behaviour” has been successfully destroyed. It’s all part of the program brilliantly co-ordinated by the Homintern to imposed The Gay Agenda on Every Aspect of British Life.

HA!  I urge you to read the rest here.  It is upsetting that there are still people out there who think that you can make someone gay, and even more upsetting that many of those people are in power.  I’m not going to try to argue the point here, you know my feelings on it, and Johann puts it so brilliantly it would be pointless, but I will show you this. 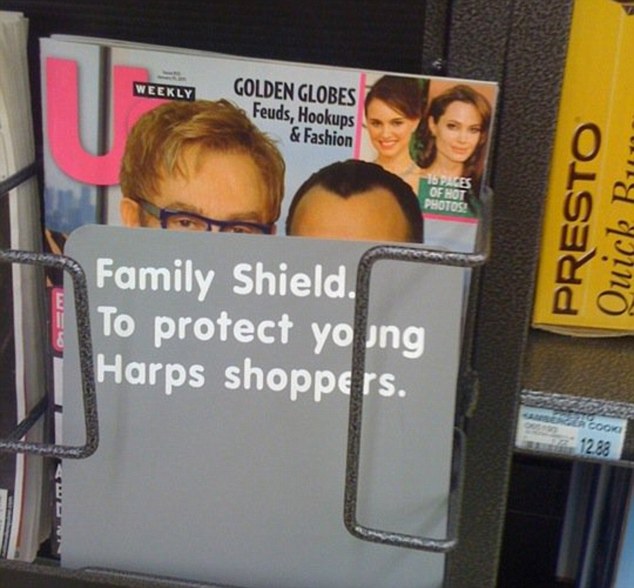 This is a picture of a recent addition of Us Weekly magazine, which featured Elton John and his partner David Furnish and their beautiful new baby boy, Zachary Jackson Levi Furnish John (we’re going to let the name go for the moment).  It depicts a happy couple, holding their new baby.  Harmless, one would have thought, however the The Harps grocery store in Mountain Home, Arkansas felt the need to cover it with a “family shield” and even went so far as to wrap some editions of the magazine in plastic (a practice usually reserved for porn).  It’s wrong, and ridiculous, but a powerful reminder that no matter how far things have come in some parts of the world, there are still backwards corners in even the most progressive countries where people think a photo of two men holding a baby will turn a kid gay.